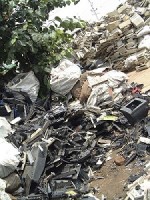 A study funded by the country’s Environment Ministry has discovered that recycling sites are contaminating India’s metropolises.

As the Hindustan Times reports, electronic waste recycling units are not sufficiently containing their discarded items, and as a result “some of the most toxic chemicals” are leaching into the soil. This was discovered by a multinational study, funded by the Ministry of Environment, Forests and Climate Change, which took soil samples from 28 different e-waste recycling facilities around Delhi, Mumbai, Chennai and Kolkata.

These industrial nasties are among the pollutants banned under the Stockholm Convention, “to which India is a signatory”, with PCDD and PCDF being “produced unintentionally during the incomplete process of combustion.”

“Developing countries like India have never manufactured these types of compounds. These compounds can keep cycling back into the environment since they are semi-volatile, which means they can spread via air or are deposited back into the soil when it rains,” said Paromita Chakraborty, Lead Investigator, SRM University.

Long-term exposure to these chemicals can cause serious and potentially life-threatening illnesses in human beings, including birth defects, cancer, and damage to the immune and central nervous systems.

“These toxic components are carcinogenic and can seriously affect health and lead to various ailments for not only those at the site, but also those living around the area,” said Chakraborty.