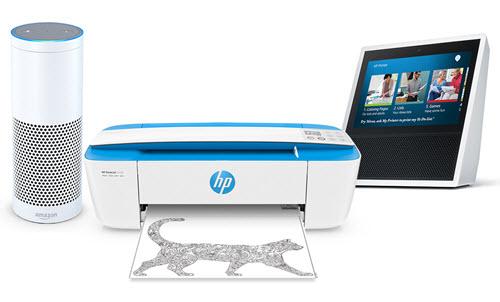 As Sarah Murry of The Garage reveals, HP “believes the consumer printer market is ripe for voice integration, making it the first print hardware company to roll out voice support for its web-enabled printers via a skill for Amazon Alexa, Google Assistant, and Microsoft Cortana.”

“Integrating voice into the home printer is an undeniably useful application of the technology,” says Anneliese Olson, general manager and global head of home printing at HP. “For busy families, the virtual assistant ecosystem makes a lot of sense and connecting a printer to it is a natural extension within the smart home.”

The kind of content you can print will differ depending on which platform you use e.g. Google or Amazon, but “it’s easy to see the convenience and utility of having the printer as part of the voice assistant ecosystem,” according to Olson.

“We’ve developed printer skills to target the hands-free, busy parent on the go,” she said. “Our tests with customers show that they want to print whenever, wherever.”

Using HP Printer skills and actions, consumers will be able to print a shopping list, produce a weekly sports calendar for their kids, print a sheet of graph paper, a Sudoku puzzle “or even a blank colouring page of a favourite character.”

HP’s collaboration with Google Assistant, Amazon Alexa and Microsoft Cortana is described as “only the first step toward a fully-voice responsive home office or business” and Olson predicts that voice commands “will, in the future, be integrated directly into printers without the need for an intermediary speaker device.”