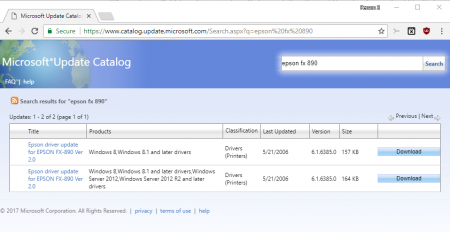 Ghacks.net reported last week that Microsoft has confirmed that its November 2017 updates for Windows “affect the printing functionality of some Epson printer models.”

As a result, print jobs on the Epson printers “are terminated with the error message “Win32 error code returned by the print processor: 2147500037″”. Epson dot matrix printers seemed to be the devices affected, and “users reported issues with printer models such as Epson LX-310, Epson FX890, and Epson LQ690.”

Microsoft issued a confirmation of the issues its updates were causing in an addendum which was added to its update support pages. The KB4048955 update page for Windows 10 Version 1709 “lists it as a new issue.”

Microsoft revealed that “the issue is not caused by printer drivers” and “cannot be corrected by installing different printer drivers for the Epson printers.”

Microsoft said, “Microsoft and Epson have determined the cause of the issue and are working on a solution. This problem is not related to the printer driver, so installing current or older print drivers will not resolve the issue. Microsoft will provide an update in an upcoming release.”